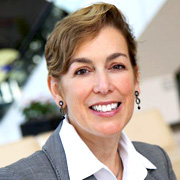 Diane Citrino is an experienced litigator who has first-chaired federal and state cases for her clients for over 30 years. She is a partner at Giffen & Kaminski, a women-owned law firm in Cleveland, Ohio that finds practical results for its clients. A former Regional Director of the Ohio Civil Rights Commission, Diane frequently conducts independent investigations into alleged workplace harassment or discrimination. Diane carries Martindale Hubbell’s preeminent AV rating.

Diane currently chairs the Ohio Advisory Committee to the U.S. Civil Rights Commission, and is a delegate of the American Bar Association. She has received numerous awards and recognition for her fair housing work including the Rosa Parks Congressional Medal. Diane was selected as one of ten “Ohio Lawyers of the Year” (after winning a case where multiple women were sexually harassed by their landlord) by Ohio Lawyers Weekly in 1999. Recently she won over $4 million for three female tenants who had lived in Cleveland apartments owned by landlords Derek and Graig Brown, because of the threats, harassment and illegal actions of the Brown brothers featured in the 2016 cover story in “Best Lawyers.”